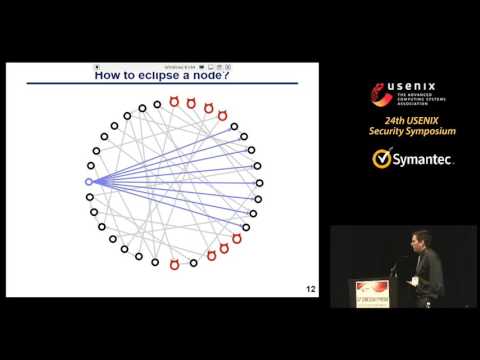 Not new news, but still interesting - Deanonymisation of clients in Bitcoin P2P network

Finally, distributors of consumer wallets can use this research in
order to distribute their wallet with policies which may be less prone
to Tor-specific attacks. Or leave this out altogether if their
audience has different expectations for connecting to Bitcoin.


Sure. I guess there will be wallets for all kinds of people in future,
sharing a common core that they can customise (this is certainly the vision
and general direction for bitcoinj, and it's working out OK).
To clarify, my comments above were for mainstream granny-focused wallets.
Wallets designed for crypto geeks can and should expose all the knobs to
let people run wild.


I hear that. But I don't see why mainstream wallets and wallets
designed for crypto research should not share a common core. Nor do I
understand why having a common core for different types of wallets
should be reserved for BitcoinJ.
When Bitcoin was pretty new, having a less customizable core did
probably have more of a merit in order to achieve network stability
through monoculture. But as of today, Bitcoin has proven itself as
being capable of allowing a variety of client application to run on
the network, so why should the reference implementation not reflect
this kind of diversity? The policy the mainstream distribution imposes
upon the core can still be rather restrictive.


One possible direction to go is to use Tor for writing to the network and
use general link encryption and better Bloom filtering for reading it. Thus
new transactions would pop out of Tor exits, but there isn't much they can
do that's malicious there except mutate them or block them entirely. If you
insert the same transaction into the P2P network via say 10 randomly chosen
exits, the worst a malicious mutator can do is race the real transaction
and that's no different to a malicious P2P node. Even in a world where an
attacker has DoS-banned a lot of nodes and now controls your TX submission
path entirely, it's hard to see how it helps them.


It might deserve some research in order to determine how Tor's
privacy guarantees might be impacted if we allow attackers to mess
around with exit node choices in a rather predictable and low-cost
manner. Unfortunately, I can't think of another (non-Bitcoin)
application which puts Tor to a similar test.


The nice thing about the above approach is that it solves the latency
problems. Startup speed is really an issue for reading from the network:
just syncing the block chain is already enough of a speed hit without
adding consensus sync as well. But if you're syncing the block chain via
the clearnet you can connect to Tor in parallel so that by the time the
user has scanned a QR code, verified the details on the screen and then
pressed the Pay button, you have a warm connection and can upload the TX
through that. It reduces the level of startup time optimisation needed,
although Tor consensus download is still too slow even to race a QR code
scan at the moment. I think tuning the consensus caching process and
switching to a fresh one on the fly might be the way to go.


I do agree that hybrid clearnet/Tor approaches come with interesting
performance properties.


When BIP70 is in use, you wouldn't write the tx to the network yourself but
you could download the PaymentRequest and upload the Payment message via an
SSLd Tor connection to the merchant. Then malicious exits can only DoS you
but not do anything else so there's no need for multiple exit paths
simultaneously.


BIP70 is interesting, indeed, although I still fail to understand why
(according to the specs I saw) the PaymentRequest message is signed,
but not the Payment message.
But in context of the discussed protocol issues, I think it just moves
the issue from the payer to the payee, so it may or may not partially
relieve network-related issues, depending on the usage scenario.
Best regards,
Isidor
 original: http://lists.linuxfoundation.org/pipermail/bitcoin-dev/2015-January/007173.html

​
Abstract
Bitcoin relies on a peer-to-peer overlay network to broadcast transactions and blocks. From the viewpoint of network measurement, we would like to observe this topology so we can characterize its performance, fairness and robustness. However, this is difficult because Bitcoin is deliberately designed to hide its topology from onlookers. Knowledge of the topology is not in itself a vulnerability, although it could conceivably help an attacker performing targeted eclipse attacks or to deanonymize transaction senders. In this paper we present TxProbe, a novel technique for reconstructing the Bitcoin network topology. TxProbe makes use of peculiarities in how Bitcoin processes out of order, or "orphaned" transactions. We conducted experiments on Bitcoin testnet that suggest our technique reconstructs topology with precision and recall surpassing 90%. We also used TxProbe to take a snapshot of the Bitcoin testnet in just a few hours. TxProbe may be useful for future measurement campaigns of Bitcoin or other cryptocurrency networks.
​
References

Dmitry is currently a principal cryptographer at Evernym, Inc. He has been an active cryptographic researcher since 2004. He developed the Equihash Proof-of-work algorithm which is currently being used as consensus mechanism for the ZCash cryptocurrency, and the Argon2 key derivation function, which won the Password Hashing Competition in July 2015.
He is the publisher of several Cryptanalysis papers for a number of mainstream cyphers, such as the first cryptanalytic attack on full-round AES-192 and AES-256 which is faster than a brute-force attack, an attack on the Radio Gatún cryptographic primitive, and also the current best cryptanalysis on Skein, a candidate for the SHA-3 competition.
In 2014, he published research about the deanonymisation of clients in the Bitcoin P2P network.
Dmitry has broken a number of ciphers and hash functions and is quoted: “Give me a system and I will find a weakness”. He is also an author of the Guru reputation system that Dusk Network will employ to ensure convergence of voting in the shortest amount of time.
​